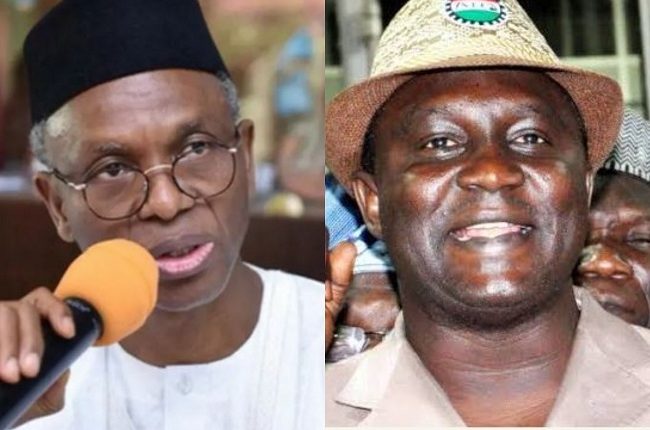 The development in Kaduna State since Monday made the Federal Government to invite both the state governor, Mallam Nasir el-Rufai and the labour leadership to an emergency meeting today.

Ngige sent personal letters to both Governor el-Rufai and the NLC president, Wabba, to invite them for the meeting.

Deputy Director, Press and Public Relations in the ministry, Charles Akpan, said the minister “has, therefore, invited the two parties to the trade dispute, the governor of Kaduna State, Mallam Na- sir el-Rufai and top officials of the state on one hand as well as the president of the Nigeria Labour Congress, Comrade Ayuba Wabba and top NLC leaders on the other hand, to an emergency conciliation meeting by 11.00 a.m. tomorrow, Thursday, May 20, 2021 at the office of the Minister of labour and Employment, Federal Secretariat, Abuja.”

The minister further directed the two parties to maintain the status quo ante bellum, pending the resolution of the issues in contention. Also speaking, Minister of Information and Culture, Lai Mohammed, while briefing correspondents at the end of the virtual Federal Executive Council (FEC) meeting on Wednesday, said apart from efforts by Ngige to resolve the issue, security apparatus have taken pre-emptive measures to ensure that the protest is not hijacked by hoodlums.

Mohammed said: “The Federal Government is not folding its arms and already, the Minister of Labour and Employment has waded in and is in touch with both the government of Kaduna State and also the Labour.”

The leadership of the National Assembly will also engage both el-Rufai and NLC leadership over the crisis as former Senate President, Ike Ekweremadu, told a delegation of Nigeria Union of Local Government Employees (NULGE), led by its president, Comrade Ambali Olatunji, that the governor ought to have negotiated with the unions before it degenerated into the present level.

Earlier on Wednesday, another set of thugs had invaded the state secretariat of NLC in Kaduna as early as 6.30 a.m., while some pro-government protesters also took over the NEPA Roundabout Junction, venue of the labour unions protest.

Numbering about 50, the thugs were later dislodged by the security personnel before the workers assembled between 9.00 a.m. and 10.00 a.m., from where they moved to the Secretariat. Among the protesters were another group of women who came to protest against the NLC but had to fight their contractors for deceiving them and failure to pay them as mobilised.

While addressing the workers, Wabba gave the reason why the action would take its full course, unless the state government opted for dialogue. He vowed that the strike would be to escalate to the national level, adding also that Nigerian workers will report the Kaduna State government to the International Court of Justice (ICJ) for prosecution against violation of human rights.

As he was set for show-down, el-Rufai had also threatened the labour leaders to get ready for prosecution over their “criminal” act of grounding the economy of the state. Speaking while declaring open the 23rd Annual Tax Conference organised by the Chartered Institute of Taxation of Nigeria ((CITN), currently ongoing at Murtala Square, Kaduna, Kaduna said as much as workers have the right to embark on strike or stage protest, they do not have the right to shut down institutions and businesses who are willing to open to transact their legitimate businesses.

Meanwhile, the Peoples Democratic Party (PDP) has charged Governor el-Rufai to immediately and unconditionally reinstate all workers he sacked from the state public service. In a statement by the party’s national publicity secretary, Kola Ologbondiyan, it said it was alarmed that the administration had sacked about 70,000 workers since 2016, as it described such act as “wicked, insensitive and unacceptable.”

Efforts by the National Drug Law Enforcement Agency (NDLEA) to block access and availability of illicit substances have again led to the interception of a container bearing 4,996,200 capsules of tramadol weighing 2,498.2 kilogrammes at the Onne Port, Port Harcourt, Rivers State. The seizure of the illicit drug concealed in 1,387 cartons on Tuesday, 18th May, 2021 followed a joint examination by NDLEA operatives and customs personnel […]