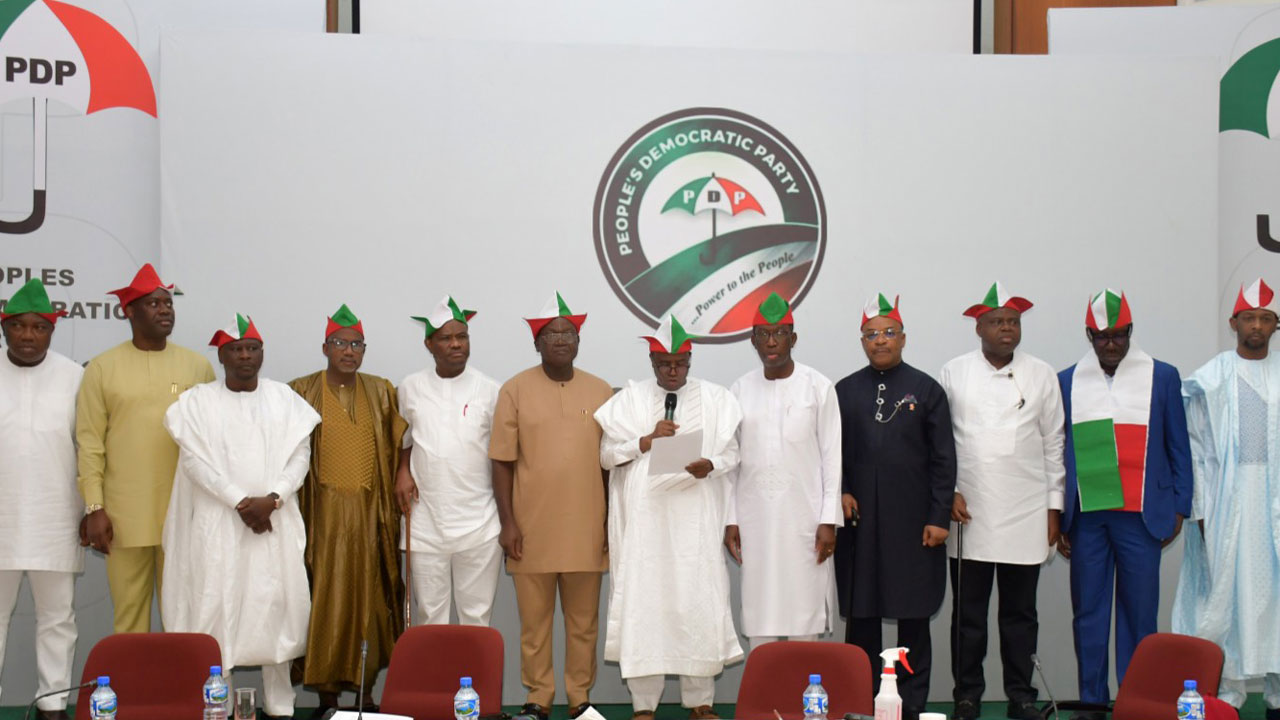 Exactly a week after the ‘Asaba Accord’ of Southern Governors, which among other things, proclaimed a ban on open grazing, governors on the platform of the opposition Peoples Democratic Party (PDP) platform, yesterday, assembled in Ibadan, Oyo State capital, for a one-day consultative meeting on state of the nation.

The forum of PDP governors at the end of their meeting, held at the International Institute of Tropical Agriculture (IITA), Ibadan, which was chaired by Governor Aminu Tambuwal of Sokoto State, issued a six-point communiqué, where it insisted that ranching be adopted as permanent solution to the herders/farmers clashes in the country.

The governors also reiterated the call for restructuring and called on President Muhammadu Buhari to summon meeting of the Nigerian Police Council and devolve more powers to states to douse the tension in the country and curb insecurity besetting it.

The meeting presided over by the PDP governors’ forum chairman and attended by 10 of his colleagues as well as the Zamfara State deputy governor, Mahdi Gusau, equally charged the National Assembly to immediately amend the Constitution to give effect to devolution of powers and state policing.

Having reviewed the state of the nation, the PDP governors called on President Buhari to send an Executive Bill to the National Assembly to amend the 1999 Constitution to devolve powers to states with respect to security architecture that will give birth to state police.

They said: “In the interim, Mr President should summon an immediate meeting of the Nigerian Police Council, which comprises Mr President and all state governors and other critical stakeholders to evolve and implement strategies to combat the present threats to our union, especially with respect to policing. The meeting agreed that the Police Force still remains the appropriate institution to secure our democracy and should not be subjected to personal attacks. The welfare, training, equipment, funding of all security agencies should be given priority.”

The governors also threw their weight behind Southern Governors on the need to adopt ranching and restructuring of the country, adding that various civil institutions must be reformed to enhance efficiency.

They said: “The meeting supports the earlier position taken by the Nigeria Governors’ Forum, Northern Governors Forum and recently by the Southern Governors’ Forum to adopt ranching as the most viable solution to the herders/farmers clashes in Nigeria; the restructuring of the Nigerian federation to devolve more powers and functions to the states; and reform of various civil institutions to achieve efficiency and equity for all sections of Nigeria.”

It called on the All Progressives Congress (APC) “to take bold and deliberate steps to de-escalate and lower tensions in our country, and concentrate on projects and policies that will enhance and promote national unity and cohesion.”

Announcing the objective of the meeting earlier, Tambuwal said the situation in the country calls for everyone who is committed to the Nigerian State to put hands on deck, not only in prayers but also in action by working together to rescue this country.

Tambuwal said: “That is the promise the PDP is holding for Nigeria, by the grace of God, come 2023. We are on a salvation mission; and it is part of the reasons why we institutionalise this meeting.”

Host governor, Oluseyi Makinde, described the ruling APC as a party without the requisite national spread. “This is the difference between our party, PDP and the APC. If they try to have such a meeting they will not have a representative from the South-South.”

ALSO rising in support of the ‘Asaba Accord’, the apex northern socio-cultural group, Arewa Consultative Forum (ACF), yesterday, reiterated its support for the ban on open grazing as recently pronounced by the Southern Governors’ Forum (SGF) in a communiqué after its Asaba meeting.

A statement issued by the ACF chairman, Chief Audu Ogbeh, and made available to journalists in Kaduna, said: “The ACF does not see any reason to object to a decision taken in the best interest of all.

“The fact of the matter is that the crisis emanates from the belief by most herdsmen that they are free to enter any farm, eat up the crops and rape or kill anyone raising objections. Nobody or society can accept that. The current high price of garri is one obvious reason of this behaviour. Few cassava farms cannot grow to maturity before it is harvested by the farmers. So food security is already being threatened.”

The ACF leader, however, said that there was the need to advise the governors in all states not to think that merely banning open grazing will end the crisis, stressing that “the bulk of the violent herders are the ones marching in from neighbouring African countries in large numbers, thousands at a time and showing no regards to boundaries whether state or regional. They have to be stopped.

“Therefore, the Umar Abdullahi Ganduje formula must be adopted to stop the entry into Nigeria of cattle from West Africa. The solution is for Nigeria to seek an amendment to Article 3 of the ECOWAS Protocol especially as regards the free movement of cattle and other livestock without special permits. If this is done, we have over five million hectares of land in old grazing reserves left, enough to accommodate over 40 million cows if well grassed and watered.

“Northern governors should immediately look into this and see the viability. Within those spaces, ranches can be developed for lease to Nigerian herders so that this matter can be brought to an end. Thereafter any herders found roaming can be penalised.

“Our ECOWAS neighbours can find ways to deal with their own issues the way they deem fit. We can seek support from AfDB, the World Bank, EU or the Kuwait Fund or any source willing to support us in resolving this problem.

“Hurling abuses, trading suspicion and threatening warfare as is currently the trend will only produce grief and disaster.”
HUMAN rights lawyer, Mike Ozekhome (SAN), has said some northerners have been kicking against Southern governors’ Asaba accord because the north is afraid that the south is now awake and “may finally attain their independence”. The senior advocate made this known in a statement on Monday made available to newsmen titled: ‘Why Some Northern Elite Are Suddenly Worried By The Southern Governors ‘Asaba Declaration?’

Ozekhome said: “The sudden unexpected kick by some Northern elite against the patriotic resolutions passed last week at a meeting held in Asaba by the 17 Southern Governors of Nigeria is quite worrisome, but definitely uncalled for. The kick is illegal, unconstitutional and even immoral.

“The sudden hoopla and ruckus seem to suggest that these few vocal elements are suddenly scared. What are they afraid of? I do not know. Or do you? But, let me do some guess work here. They may probably be afraid that the South has finally woken up and shaken off its Stockholm Syndrome.

“I guess they are scared that the assumed long suffering ‘slaves’ of Nigeria may finally achieve their overdue liberation, liberty and freedom, and attain their independence from the asphyxiating grip of perpetual overlords, ‘slave’ masters, neo-Colonialists and territorial expansionists.

“They may fear that under a true fiscal federation, anchored on the true principles of Federalism, everyone will now be required to contribute to the baking of the national cake and not just merely sharing it.”

MEANWHILE, the 36 governors of the federation will be convening their 30th teleconference meeting tomorrow, May 19, to address matters arising from a variety of challenges such as the ongoing conversation over the contentious Executive Order 10, the third wave of COVID-19, an update of the States Fiscal Transparency, Accountability (SFTAS) report, among others.

According to a statement by the head of public affairs of the Nigerian Governors’ Forum (NGF), Abdulrazaque Bello-Barkindo, the meeting, which will be the seventh this year by the governors, will as usual, be virtual. He said the meeting will cover lessons for states and actions for governors on sustainability.

“The Governors’ PTF Committee, headed by Delta State Governor, Dr Ifeanyi Okowa, which is charged with the responsibility of liaising between the Presidential Task Force (PTF) on COVID-19 and the Governors’ Forum, will brief the Forum on health matters arising from the coming of the third wave of COVID-19.

“Further, there will be a presentation from the Minister of Agriculture and Rural Development, Mr. Sabo Nanono, about the second phase of Farmers’ Enumeration. Also, the Director-General of the NGF, Mr. Asishana B Okauru, will give feedback on the series of Executive Order 10 meetings with the Minister of Labour and Employment, Dr. Chris Ngige, about the ongoing industrial action by the Judiciary Staff Union of Nigeria and the Parliamentary Staff Association of Nigeria,” he stated.

ALSO, amid raging calls for secession, Southwest governors are expected to attend a meeting at the Lagos House, Marina, on Sunday, May 23. The meeting, it was learnt, is being convened by a former interim Chairman of the All Progressives Congress, Chief Bisi Akande.

Although the agenda of the meeting was not stated, it was gathered that the meeting was convened to address rising calls for secession in the light of the activities of Sunday Igboho, among others.

The Justice and Equity for Peace and Unity Initiative (JEPUIN) – the premier pan-Nigerian organisation – yesterday backed most of the decisions taken by Southern governors at their meeting in Delta State. In a statement by its Chairman, former Jigawa State Governor Saminu Turaki, Vice Chairman Raymond Dokpesi and General Secretary Tony Uranta, the group urged Northern governors to meet urgently to endorse their Southern counterparts’ “positive” recommendations. JEPUIN, however, […]