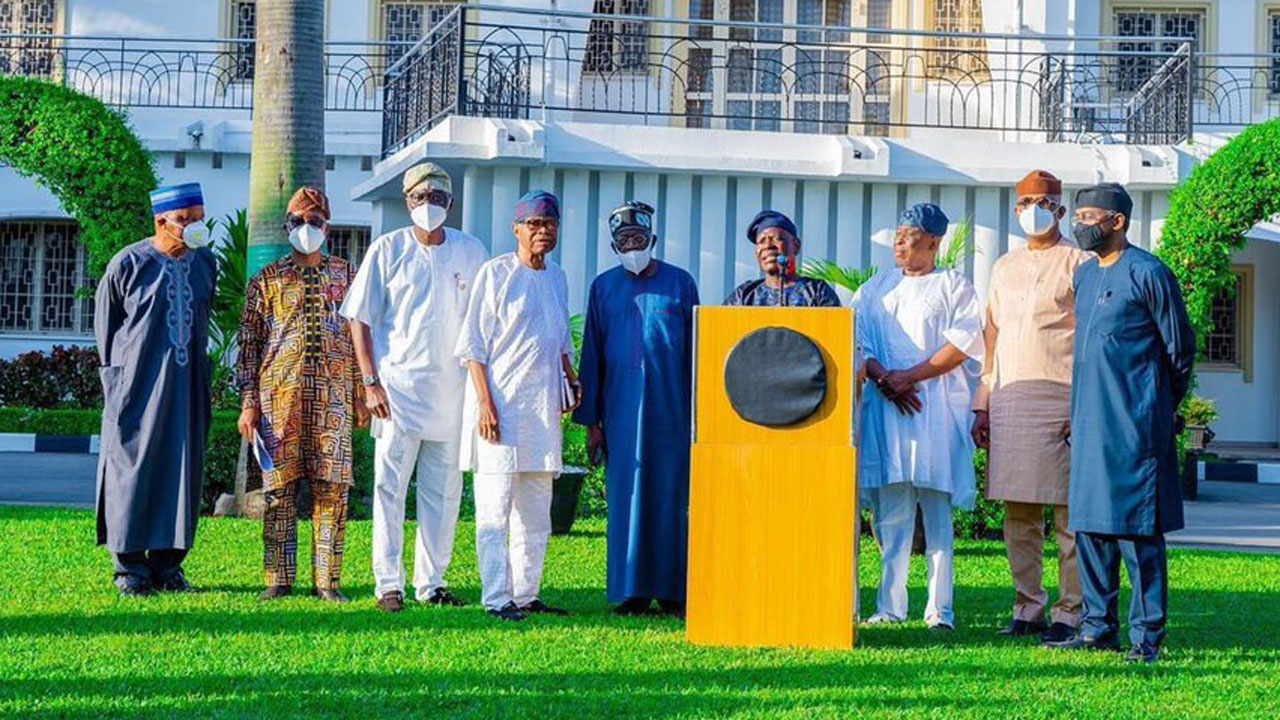 Southwest leaders in the ruling All Progressives Congress (APC) have endorsed the position of the 17 Southern governors taken at their May 11, 2021 summit in Asaba, Delta State, especially on ranching and ban of open grazing in the entire Southern states.

The leaders also rejected calls for disintegration of Nigeria, saying that the country needs religious and ethnic unity to progress. This is coming amid calls for the creation of a Yoruba nation in the Southwestern part of the country.

The Governors of Ekiti and Ondo states, Dr. Kayode Fayemi and Arakunrin Rotimi Akeredolu were conspicuously absent. Also absent was the Chairman, Police Service Commission (PSC) and former Inspector-General of Police, Alhaji Musiliu Smith. One of the leaders, upon enquiry, disclosed that the two governors asked Otunba Adebayo, who also did not wait till the end of the meeting, to represent them.

The Southwest APC leaders added that though they were mindful of the short-term dislocation the Southern governors’ decision might cause, “we are also mindful that this position is in the best interest of all parties concerned. We, therefore, recommend that the federal and state governments cooperate fully with each other to enact the necessary measures to encourage more effective and modern method of cattle-rearing so that both farmers and herders can pursue their livelihoods with greater productivity and in a more cooperative relationship that minimises the friction between these two important pillars of our agricultural economy.”

In the nine-point communiqué, the leaders expressed concern about the state of the nation, particularly, the serious security challenges facing the country.

The communiqué reads: “We commiserate with and condoled the President and Commander-in-Chief, President Muhammadu Buhari, military authorities, families of the Chief of Army Staff and other officers who died, and indeed the entire nation over last Friday’s tragic plane crash in Kaduna.

“We express our strong opposition to separatist agitations and hate speeches. While urging those indulging in such to desist forthwith, we renew our belief in the unity, stability and sustainability of the country.

“We note with significant concern the security situation in the country. Terrorism and violent criminality threaten many areas, adversely affecting the lives and livelihoods of too many innocent and peace-loving Nigerians. While mindful of the resource and other constraints facing the nation, we urge the Federal Government to continue to make the necessary expenditures and allocate sufficient resources to enable the military and security agencies to tackle the difficult security challenges confronting us.

“For Nigeria to overcome these challenges, we must do so with unity of purpose and action. The desire for peace and the chance for a prosperous and just society is universal and transcends all regional, religious or ethnic divisions. Sadly, many public figures have made statements that spark division and undermine the needed unity of purpose. We urge government at all levels, security agencies, and public leaders across the country to do everything possible to prevent tension so that we sustain the necessary unity to defeat these challenges to our national security. All responsible Nigerians must speak and act in a manner that strengthens our common cause against these common threats to our collective peace, justice and development.”

The leaders also restated their abhorrence of violence as a means to achieve either political or economic power and influence, saying: “We strongly condemn violence of any form in any part of the country, regardless of ethnic or regional identity of the perpetrators of the violence or of the victims. Government must do all it can to protect potential victims and to assist those who have previously been victimised by terrorism or widespread banditry.

“We hold to the view that true federalism where more power and resources are allocated to the states will be an essential part in strengthening society and improving democratic governance so that we beat the present challenges but also engender durable peace and security. True federalism and the reallocation of resources and authority that comes with it will empower the states to solve localised issues before they spread and transform into national ones. In addition to mitigating political competition for control of the national government, greater federalism will empower grassroots economic development and political reforms that will stand as bulwarks against the terrorism and criminality now experienced in too many parts of the nation. A hallmark of this enhanced federalism will be the establishment of state police forces.”

While they thanked traditional rulers for their important role in the polity and appeal to them to keep intervening to maintain peace and stability, the leaders urged the Federal Government to provide, through the Central Bank (CBN), short, medium and long term financing for states and those who may wish to set up ranches as part of the agricultural sustainability policy.

MEANWHILE, Tinubu after the briefing, told journalists he has not endorsed any candidate for the coming July 24 local government elections in Lagos State. He noted that the party Governor’s Advisory Council (GAC) met in Lagos on Friday, May 21, and discussed ways to ensure fairness of the party’s primaries for the election.

“Unfortunately, people intent on sowing discord and undermining democracy within the party have begun to spread lies and rumours that I and the GAC have a list of preferred candidates for the upcoming primary elections and that the party will skew the primaries to benefit these people. We state, categorically, there is no such list nor are there any plans to influence the primaries in any manner. These stories are false and mean-spirited attempts to hurt the party.”

COAS, 10 others’ death: Air Force to decide on military jets after probe

The Nigerian Air Force on Sunday assured Nigerians that investigations into last Friday’s plane crash and other recent ones would be transparent. The NAF spokesman, Edward Gabkwet, in an interview with one of our correspondents, said the force would not rush to take any decision, but would wait for the outcome of the investigation involving it and the Accident Investigation Bureau before deciding on the fatal plane crashes. […]