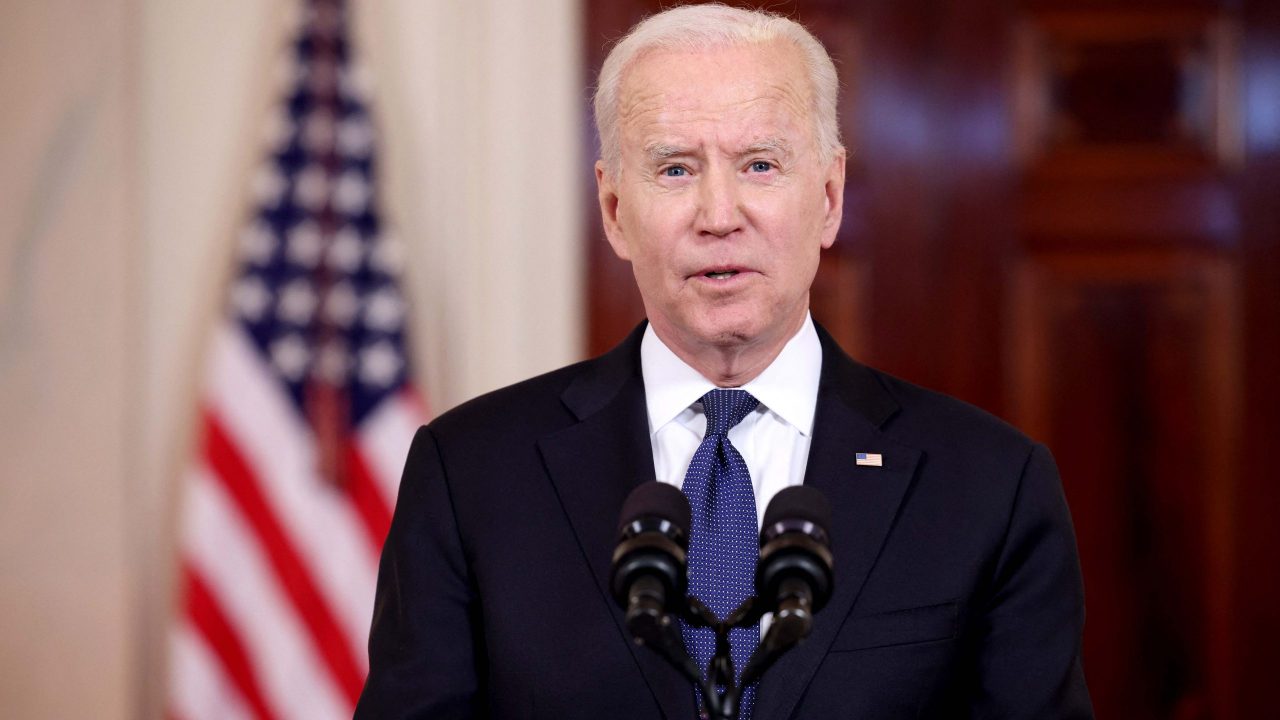 WASHINGTON, DC – MAY 20: U.S. President Joe Biden delivers remarks on the conflict in the Middle East from Cross- Hall of the White House on May 20, 2021 in Washington, DC. Israel and Hamas announced that they would agree to a cease-fire, which will take into effect on Friday, following days of fighting that claimed more than 200 lives. Anna Moneymaker/Getty Images/AFP (Photo by Anna Moneymaker / GETTY IMAGES NORTH AMERICA / Getty Images via AFP)

President Joe Biden meets South Korean President Moon Jae-in at the White House on Friday to underscore a strategic focus on Asia, while playing down chances of quick progress on the two biggest challenges facing the United States.

The rising power of China as a rival for leadership in Asia and the powder keg of nuclear-armed North Korea loom over the talks.

The Biden administration admits it has no easy answer to either.

“The goal here is to understand that this process is likely to be challenging and to give ourselves maximum flexibility,” a senior White House official said about dealing with North Korea’s nuclear arsenal.

Against that backdrop, Washington’s main emphasis is on rebuilding traditional US alliances in the region, especially with South Korea and Japan.

Where Donald Trump treated foreign partners alternately as cut-throat business competitors or freeloaders, Biden is once more leaning on democratic alliances forged in bloody 20th century conflicts as the core to maintaining US supremacy.

The US-South Korean relationship “is the lynchpin of security and prosperity for northeast Asia and a free and open Indo-Pacific,” the White House official, who asked not to be identified, said.

Symbolizing the deep, complex history behind those bonds, Moon will join Biden in awarding the Medal of Honor the highest US military honor for bravery — to a 94-year-old US veteran of the Korean War.

Then first lieutenant Ralph Puckett was wounded in 1950 while leading US and Korean soldiers in the desperate defense of a hill against an overwhelming force of Chinese troops — an early episode in China’s decisive entry into the war.

The White House said this would be the first time a foreign leader has taken part in a Medal of Honor ceremony.

Commercial ties will be high on the agenda. Commerce Secretary Gina Raimondo and her South Korean counterpart will hold separate talks involving a raft of CEOs with a focus on high-tech manufacturing battery technology, semi-conductors and 5G wireless.

But the bulk of the Biden-Moon meeting will likely focus on China, including its sabre rattling around Taiwan, and on attempts to get North Korea to give up its nuclear weapons.

Don’t expect much in the way of strong, clear statements when the presidents issue a joint declaration afterward, however.

Asked if concern over the future of Taiwan would be aired, the White House official said there would be “a reference to regional security generally and maintenance of peace.”

And on North Korea, which has foiled US presidents for decades, similarly vague language is likely.

“Our goals remain the complete denuclearization of the Korean peninsula,” the official said.

However, the White House has “a clear understanding that the efforts of past administrations have not achieved this objective.”

Out are former attempts to reach for a so-called “grand bargain” with Pyongyang or simply to show what diplomats termed “strategic patience.”

Now the White House is touting “a calibrated practical approach” — diplomatic jargon, it seems, for being realistically low key, while open-minded.

“We understand where previous efforts in the past had difficulties and we’ve tried to learn from those,” the official said.

“I don’t expect that to be top on his agenda,” she said.