BREAKING: Juventus sack Andrea Pirlo as manager after one year 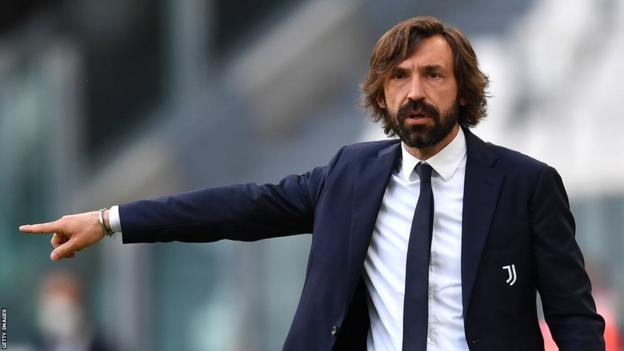 Juventus have sacked Andrea Pirlo as manager after he spent just one season in charge of the Italian club.

The 42-year-old was a surprise choice to replace Maurizio Sarri last summer but under his guidance Juventus failed to win the Serie A title for the first time since 2012.

The Turin-based club finished fourth, only qualifying for the Champions League on the last day of the season.

Massimiliano Allegri is expected to return for a second spell as manager.

Allegri was in charge of Juventus from 2014-19, winning five successive league titles and reaching the Champions League final twice. He is currently without a job.

Pirlo played 164 games for Juventus between 2011 and 2015 and won four Serie A titles in Turin after joining from AC Milan, with whom he spent most of his career and won two Champions League and two league titles.

He also earned 116 caps for Italy and helped them to win the 2006 World Cup, retiring in 2017 having spent two years in Major League Soccer at New York City FC after leaving Juventus.

Pirlo’s appointment as Juventus manager was a shock and although he did win the Italian Super Cup and Coppa Italia, it was not enough to keep his job.

A statement on the Juventus website said: “For the courage, the dedication, the passion with which he demonstrated every day, our thanks go to the ‘Maestro’, the coach and to Andrea, that really comes from the heart, as well as our good luck for the future that will surely be a wonderful one.”

IMAGE COPYRIGHTGETTY IMAGES image captionTwitter's CEO Jack Dorsey has previously said the company would diversify its revenue sources.     Twitter has listed a new subscription service on app stores, in an indication that the social media giant is preparing to trial the offering soon. "Twitter Blue" is listed as an in-app purchase, priced at £2.49 in the UK and $2.99 in the US. Twitter has given no further details, […]