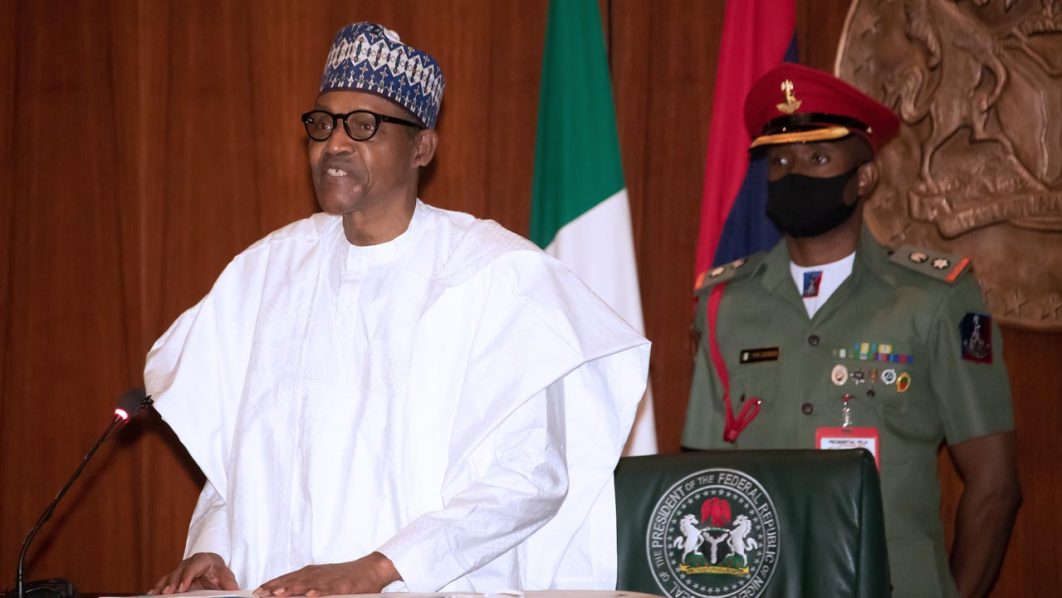 After being assailed by unrelenting insecurity across the regions of the country and yielding to calls for international collaboration, President Muhammadu Buhari yesterday sought the help of the United States government to contain the situation in the country.

During a virtual meeting with the U.S. Secretary of State, Mr. Anthony Blinken, Buhari stressed the need for the U.S. to consider relocating its Africa Command (AFRICOM) from Stuttgart, Germany, to Africa, nearer the Theatre of Operation, while urging the international community to support Nigeria and the sub-region in tackling growing security challenges to avoid spillovers.

President Buhari said: “The security challenges in Nigeria remain of great concern to us and impacted more negatively, by existing complex negative pressures in the Sahel, Central, and West Africa, as well as the Lake Chad Region.

“Compounded as the situation remains, Nigeria and her security forces remain resolutely committed to containing them and addressing their root causes. The support of important and strategic partners like the United States cannot be overstated as the consequences of insecurity will affect all nations hence the imperative for concerted cooperation and collaboration of all nations to overcome these challenges.

“In this connection, and considering the growing security challenges in West and Central Africa, Gulf of Guinea, Lake Chad region and the Sahel, weighing heavily on Africa, it underscores the need for the United States to consider re-locating AFRICOM headquarters from Stuttgart, Germany to Africa and near the Theatre of Operation,’’ he said.

The spate of attacks, which had been worsening in weeks, got to a frightening crescendo in the last 72 hours as a reign of terror descended in all the six geo-political zones of the country.

SENATORS yesterday expressed fears that the Boko Haram insurgents might overrun the nation’s capital, Abuja because of the attacks the deadly group had launched on neighbouring states. On Monday, governor of Niger State, Sani Bello, revealed that Boko Haram terrorists had taken over about 50 communities in the state, adding that the terrorist group is just some two hours away from Abuja. His counterpart in Nasarawa, Governor Abdullahi Sule, had also lodged similar complaint of Boko Haram cell in the state.

Senator Smart Adeyemi (APC, Kogi West) was moved to tears while contributing to the debate. He said: “Insecurity is a serious problem in Nigeria. There comes a time where we cannot but speak the truth irrespective of sentiments. Mr President, we need not run away from the fact that more than ever before in the history of our nation, this is the worst instability we are facing. In fact, this is worse than the civil war. The answer is very simple. We cannot pretend that we are capable of confronting the situation in our hands. We need foreign support now.”

As a way of addressing the issue, the Senate resolved to send its leadership to meet with President Buhari, but no date has been fixed for the meeting. The decision followed a motion moved through a point of order by Musa Sani from Niger State. After a long debate, the Senate resolved that the President of the Senate, Ahmad Lawan, will lead other principal officers of the upper legislative chamber, to meet with Buhari.

It also resolved to summon the newly-appointed service chiefs to brief them in a closed-door session on steps so far taken to salvage the situation. No date has however been announced.

The Senate similarly urged its committee on Foreign Affairs to liaise with the Ministry of Foreign Affairs and National Intelligence Agency (NIA), on the implications of the fallout of the death of the President of Chad, Idriss Deby.

Sani had while leading the debate, said: “Unfortunately, these repeated attacks are taking place amidst absence of slightest hindrance, resistance or confrontation from the authorities concerned.”

Musa informed his colleagues that about 42 communities across the two local government areas of Shiroro and Munya have so far fallen under Boko Haram control with about 5,000 villagers already displaced in the last three days.

Confirming the conquest of some towns by Boko Haram, Musa said: “I can authoritatively confirm that the Boko Haram terrorists have mounted their flags in many of the villages they have captured such as Kaure, Alawa, and Magami. Inhabitants of these areas have been abandoned and left to their fate, thereby compelling them to wallow in perpetual agony and abject misery.”

Former Deputy President of the Senate, Ike Ekweremadu, in his submission, said the government has lost its legitimacy to lead. He said since the primary responsibility of government is to protect the people, that has not been done.

He said: “We have made beautiful suggestions and have had retreats on insecurity. Unfortunately, the recommendations haven’t been implemented. We need to do something about this and very fast too. If we need to shutdown Niger State or the Senate in order to find solutions, let us do that.”

Deputy Chief Whip of the Senate, Sabi Aliyu Abdullahi, warned that Abuja is the next target of the terrorists if Niger State is not immediately rescued from their grip.

A retired army Colonel and Senator from Gombe State, Amos Bulus, said Boko Haram terrorists are already moving into Abuja from every corner. He warned that something huge is going to happen if nothing is done. He didn’t reveal what would happen.

Olubunmi Adetunji said: “We need to have a private session with President Buhari who is the Commander-In-Chief. We need to end this huge embarrassment. We are gradually snowballing into a full-blown war. Enough is enough. I propose that a delegation should meet with Buhari and find a solution.”

Out of the 39 students, 10 had so far been released, the remaining 29 of them. But as a result of the policy of the governor Nasir El-Rufai administration against payment of ransom or negotiation with bandits, it had made the bandits now negotiate with the parents directly.

In the latest video, a pregnant student simply identified as “Hajiya” pleaded with her parents for rescue, adding that for days, they have been without food.

Also, another woman abducted by the bandits, said to be a wife of a naval officer, featured in the video. The woman said to have been abducted from Trikaniya in the Chikun Local Government Area of Kaduna State, said her husband is a military officer based in Warri, Delta State. She too pleaded with the Federal Government to come for their rescue, saying that the bandits had earlier agreed on N30 million as a ransom for their release.

WORRIED by the prevailing insecurity in the Northeast, Borno State Governor, Babagana Zulum, again visited the Presidential Villa, Abuja, yesterday where he sought to “tell President Buhari the truth.” Speaking to newsmen after the meeting, Zulum decried the recent terrorist attacks, which have caused the lives of many soldiers in the state.

The governor said it behooves him to visit the seat of power in Abuja and tell the president the whole truth about the situation in the region. “I think it is my own responsibility to come and say the truth to Mr. President, let him know what is going on in the entire Northeast sub-region.”

While noting that the situation was pathetic, Zulum emphasized the need for support to help the area to get rid of insurgents. He further lamented that thousands of people have fled their homes and left many communities in the area deserted. “It’s very pathetic. Few days ago, Damasak was attacked, hundreds of people started fleeing Damasak and now Geidam is almost deserted. Many people have left Geidam.”

GOVERNOR of Rivers State, Nyesom Wike, in his review, declared that Nigeria has totally collapsed. The governor said the baffling state of insecurity and the unchallenged killings of citizens by outlaws in parts of the country is a clear manifestation of a failed nation, which was a sequel to bad leadership. Wike stated this at the Government House, Port Harcourt on Tuesday when he had an interactive session with traditional rulers, political and opinion leaders of Andoni nationality.

He said: “Nigeria has totally collapsed. Look at, today, what happened in Nasarawa and Benue states, how they slaughtered people on the road. See what is happening in Niger State and the APC governor there is crying, saying he has been talking to the Federal Government but nobody has listened to him. And that Boko Haram has come to take over the state, which is closest to Abuja.”

The governor recalled that when he raised the alarm of the looming danger of insecurity, it was politicised, some persons in the opposition dismissed it as mere politics. But, ironically states controlled by the All Progressives Congress (APC) are now the worst hit.

According to him, instead of leaders being bold to speak against the ills in the land and sincerely pursue solutions to them, they indulge in sycophancy. “Look at Kaduna and Imo states, there is insecurity everywhere. The only anger I have with Imo governor is this: I don’t know how people politicise things.”

The governor thereafter imposed night curfew at all entry and exit points with Abia, Akwa Ibom, Bayelsa, and Imo states. The lockdown is necessitated by recent security breaches and deadly attacks on security personnel by unknown gunmen. Wike in a state broadcast said the curfew takes effect from Wednesday night.

The governor said: “The Government of Rivers State has decided to restrict night movements in and out of the state from the land borders. Consequently, a night curfew is hereby imposed and no person or vehicle is allowed into and out of Rivers from 8:00 p.m. to 6:00 a.m. from today (Wednesday) until further notice. We wish to advise that those who have any legitimate need or reason to come into or go out of the state to do so before 8:00 p.m. when the curfew shall come into force daily.”

RISING from a four-hour executive session yesterday, the House of Representatives has asked President Buhari to declare a state of emergency on security following the ongoing killings and general uprising in the country. Speaker of the House, Femi Gbajabiamila, who read out the resolutions, summoned the national security adviser, Babagana Monguno, to appear before it.

Also to appear before the lawmakers are the service chiefs, the Inspector General of Police, and heads of para-military agencies in the country.

THIS is coming after unknown gunmen in the early hours of Tuesday attacked the Federal High Court Abakaliki, burning some sections of the building. Confirming the attack, the police spokesperson in the state, DSP Loveth Odah, said the hoodlums came in large numbers and set a section of the court ablaze, noting that firefighters quickly intervened and quenched the fire.

She noted that the gunmen scaled the court perimeter fence to carry out the attacks, adding that two security guards were also injured during the attack. The court’s library and the security post were badly torched.

The President, Muhammadu Buhari  • Security situation very pathetic, Buhari should be told the truth, says Zulum Senators and three governors on Tuesday expressed concern about the nationwide ceaseless killings and kidnappings in the country, urging the President, Muhammadu Buhari , to seek foreign help. The lawmakers, while debating a motion on activities of Boko Haram in Niger State, described insecurity in the country as not only terrible, but also […]