Look beyond military in war against insecurity, EU tells FG 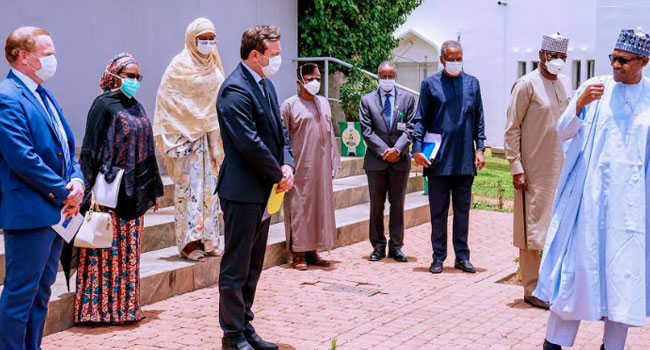 Ambassador Ketil Karlsen and other EU officials during a visit to President Muhammadu Buhari at the Presidential Villa, Abuja.

The European Union (EU) has advised the Federal Government to look beyond military deployment in the ongoing war against terrorism in the Northeast and other crises causing insecurity across the country.

Addressing a media briefing ahead of Europe Day 2021, Head of the EU Delegation to Nigeria and to the Economic Community of West African States (ECOWAS), Ambassador Ketil Karlsen, said insecurity crises in the country have shown that while the military option should not be foreclosed, other options, including dialogue and legal instruments, should be evolved and explored.

Karlsen reaffirmed the commitment of EU to a strong and robust mutually beneficial partnership with Nigeria, and declared its continued support for the country in addressing challenges and seeking opportunities.

He said the EU-Nigeria partnership had never been stronger and more relevant, even in the face of recent upheavals, noting that the EU bloc of 27 member states remains Nigeria’s biggest trading partner, first investor, a top donor of humanitarian and development aid and the biggest diplomatic network.

He said multiple examples of EU engagement in Nigeria include working with the authorities to bring an end to security challenges across the country. According to him, “we are supporting government’s efforts to fight terrorism, radicalisation and violent extremism as well as the reform of the criminal justice system.”

“Instead of giving Nigerians the false impression that the United States is going to send troops to defend them, the Federal Government should be compelled to embark on mass recruitment of military and police personnel, equip and motivate them to defend every part of the country. In addition, all state and local governments should proceed to set up defence committees constituted by young men and women in every community to collaborate with the police in securing the lives and properties of all citizens,” Falana said while delivering a paper in Abuja yesterday.

The paper was presented at a public lecture to mark the 80th birthday of Omotoye Olorode, a professor of botany and activist. Falana said the government should strengthen the security forces and not wait for U.S. support, which may likely not come.

The senior advocate said: “Regrettably, Nigeria is currently witnessing the virtual collapse of the security architecture of the neocolonial state due to the diversion of the huge fund earmarked for procurement of arms and ammunition for the armed forces and the police by successive regimes.

“To prevent terrorists and bandits from sacking the government, President Buhari has appealed to President Joe Biden to come to the aid of the ruling class in waging war against terror and banditry. And without consulting either the African Union or the ECOWAS, the federal government has asked President Biden to relocate the US African Command (AFRICOM) in Germany to Africa.

“Since 2009, the cry for help in prosecuting the counter insurgency operations had fallen on the deaf ears of the leaders of the West. As if that was not enough, the United States and her allies prevented Nigeria from acquiring vital security equipment to prosecute the war on terror due to the abysmal poor human rights record of the armed forces and the police”.

Reports of kidnappings and violent killings perpetrated by bandits and Boko Haram terrorists have dominated the news lately. These reached a peak last week as 239 persons were killed and 44 kidnapped in separate incidents across the country.

Alarmed Nigerians, including lawmakers, have pressured the presidency to seek help abroad. President Buhari, during a virtual meeting with the US Secretary of State, Anthony Blinken, on Tuesday, begged the American government to reconsider relocating US Africa Command (AFRICOM) from Stuttgart, Germany, to Africa, nearer the theatre of operation.

THE proposal has expectedly attracted diverse reactions from diplomats, foreign affairs and security experts. Former Minister of State for Defence, Dr. Olu Agunloye, said the invitation of U.S. and other foreign nations is a welcome development because Nigeria has been mismanaged and now faces very critical problems that can lead to its total collapse. According to him, when you are faced with issues that can become permanently irreversible, then you have to swallow your pride and look for help from everywhere.

“The security crisis has gone beyond us, we must go back to the Americans to bring back ARFICOM, because the reason we said we don’t want it before was at the point when we were in a position of strength. This latest decision is not a sign of weakness but a matter of last grasp effort because the leadership has messed things up.”

For renowned historian and member of the New York-based Advisory Board of the African Peace Building Network, Prof Ayodeji Olukoju, the call for help is not something to be ashamed of.

“Why do we have to wait this long to ask for this kind of help? I believe that it is a sensible decision, it is late in coming but it is never too late. But first things first, what will be the terms, what do we have to give in exchange for this help?

“People may say it is a form of re-colonialism or neocolonialism but Nigeria had intervened in Liberia, Sierra Leone, and most recently in Mali and Guinea. The situation then warranted the position taken by ECOWAS leaders in 2012 against siting AFRICOM here, but this is 2021, the situation does not warrant it.”

The Assistant Secretary General of the Nigerian Society of International Affairs, Society for Peace Studies and Practice, Historical Society of Nigeria, Dr. Joshua Bolarinwa, said the invitation is necessary because the security challenges Nigeria is facing is far more than what she can bear. “Unfortunately, the death of Idris Debby has also created a big challenge for Nigeria in the fight against Boko Haram. Chad has been so helpful and that was why the headquarters of Multinational Joint Task Force was moved to Ndjamena,” he said.

But National President of the Association of Licensed Private Security Practitioners of Nigeria (ALPSPN), the umbrella body of all registered and licensed private security companies in the country, Davidson Aikhmen, said those calling for international intervention are not sincere in seeking for help. The security expert said at present, there is a lot of confusion in the land.

“We have the resources domestically speaking to curtail and contend with the insecurity challenges but our problem is more political. When there is political will on the part of the leadership to deal decisively with the threats we face, when there is no ethnicisation of the problem, we will achieve result. When there is justice in the way that issues are handled and there is absolute neutrality on the part of the leadership and military actions are allowed to be executed with military protocols without the interference of the political leadership, the restiveness will die down and there will be little need for international assistance.

“At the onset of Boko Haram insurgency, we had a lot of international assistance that came in but when they saw the betrayal taking place, especially how information and intelligence was getting into enemy hands, they beat a retreat.”

GOVERNOR Aminu Bello Masari of Katsina State has declared that the call for a state of emergency by the National Assembly will not address the raging security challenges bedeviling the nation. He spoke to State House Correspondents yesterday after he met with the Chief of Staff to the president, Prof. Ibrahim Gambari, at the Presidential Villa, Abuja.

This is coming barely 48 hours after the parliament asked President Muhammadu Buhari to declare a state of emergency on security, following the recent taking over of 42 communities in Niger State by Boko Haram.

According to Governor Masari, the military are already overstretched hence declaring a state of emergency will amount to stretching them the more.

He appealed to Nigerians to stop the tendency to politicise security issues, pointing out that policing the nation, especially at this critical time was everybody’s business.

THERE was increased security at the National Assembly yesterday as security agents spent more time inspecting vehicles coming into the assembly complex.

The search of vehicles was more intense than normal causing a long queue at the entrance into the Assembly. Legislative staff and journalists also spent more time trying to get into the complex.

Some staff and visitors at some point got tired of waiting and were seen alighting from their cars to trek from the MOPOL gate under the scorching sun. According to reports, there was an alleged security threat, which necessitated the tighter inspection.

THE Rivers State Security Council has imposed dusk-to-dawn curfew on the entire 23 Local Council of the state with effect from today. Governor Nyesom Ezenwo Wike, in a statewide broadcast, said the decision to impose the dusk-to-dawn curfew on the entire state was taken after an exhaustive deliberation by the State Security Council at the Government House, Port Harcourt yesterday.

The governor recalled that on April 28, the State Security Council, in consideration of the recent murderous attacks on security personnel in Ikwerre and Abua/Odual Local Government Areas had imposed a nighttime curfew on all entry and exit points with Abia, Akwa Ibom, Bayelsa and Imo states.

But after a review of the present security situation, the governor said there are possibilities of further deadly attacks on hard and soft targets across the state. And to this end, he said it has become imperative for the government to take further necessary measures to secure the state and safeguard life and property.

“Consequently, a night curfew is hereby imposed on the entire 23 Local Government Areas of the State, prohibiting any human and or vehicular movement within or any part of the state from 10:00p.m. to 6:00a.m. from today until further notice.”

MEANWHILE, the National Security Adviser to the President, Maj.-Gen Babagana Monguno (retd.), has assured airport users and stakeholders of the safety of aviation infrastructure in the country. Critical government infrastructure have come under attack in the last couple of months due to the worsening security situation in the country.

In a statement on Thursday, the NSA’s Office assured airport users that there was no cause of alarm for any security breach at the nation’s over 20 airports.

The statement read: “The attention of the Office of the National Security Adviser has been drawn to reports of a threat of the nation’s airports from an internal government correspondence. The correspondence was a routine threat assessment to ensure preparedness of agencies and not meant for public dissemination.

“In the period covered by the correspondence, threat analysis identified the need to advise airports management nationwide to upgrade existing security measures around the nation’s airports.

“Regrettably, the unauthorised releases of this advisory is likely to raise fear among airport users home and abroad. Accordingly, this statement is issued to reassure the public and all aviation stakeholders of the safety of our airports.”

Team Nigeria out of World Relays over visa snag

Nigeria will miss out of the World Athletics Relays, which starts in Silesia, Poland Saturday over visa issues, The PUNCH reports. Our correspondent gathered on Thursday that the Nigerian team was yet to secure Polish visas with a day left before the event. The World Relays serves as qualifiers for the relay events of the Tokyo 2020 Olympics for teams that are yet to qualify. Nigeria has not qualified for […]